Now, you can check your tournament performance records in detail by opening the bio window and clicking the "Tournaments" tab. 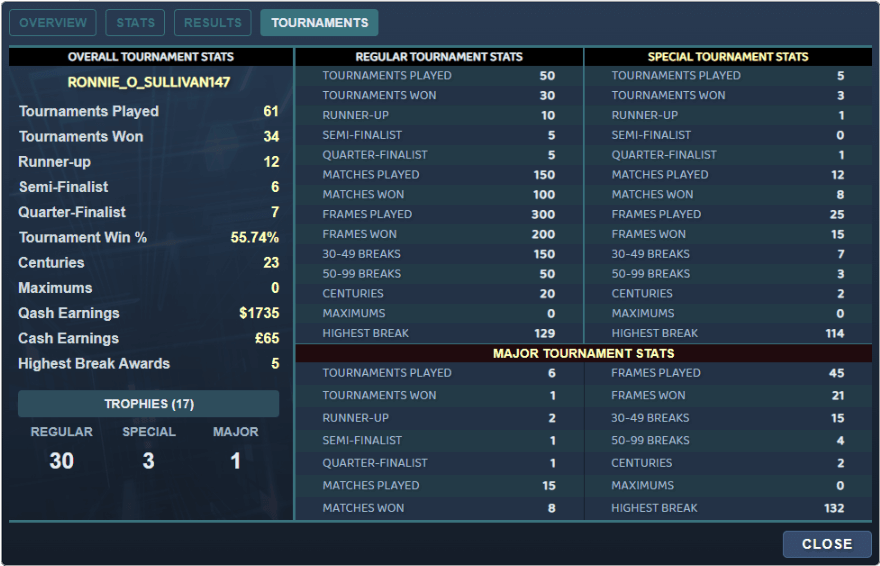 This is a new feature that shows you live performance stats from an ongoing match. 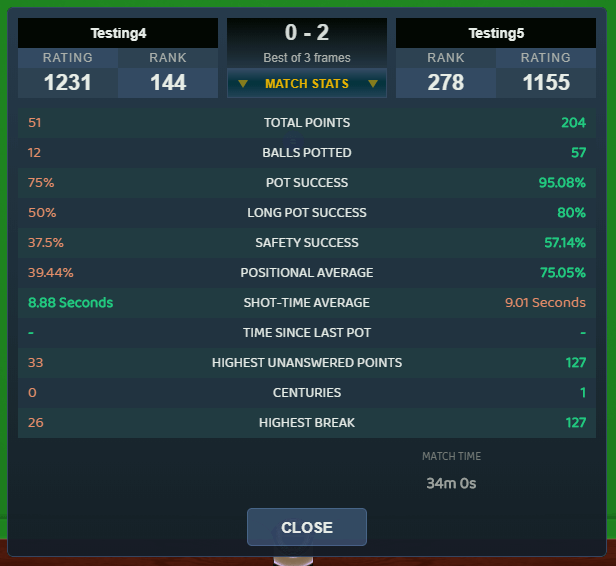 You can access this feature by clicking on the Match Stats icon or by the CTRL-S shortcut:

You can also view performance stats from finished matches by clicking the match stats icon in the Results bio tab: 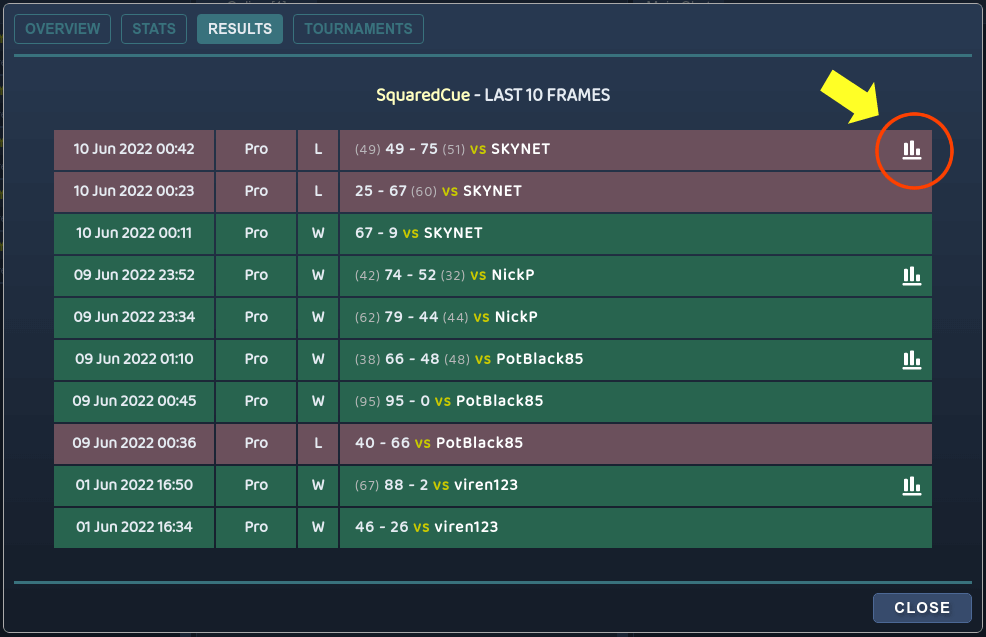 Keyboard/Mouse Shortcuts and Chat Commands are now contained in one window. Learn about all the extra tricks you can use to improve your play by navigating through the list of keyboard & mouse shortcuts.

We also have a list of handy Chat Commands that some users may not have known about. Don't worry, you now have access to all the secrets! 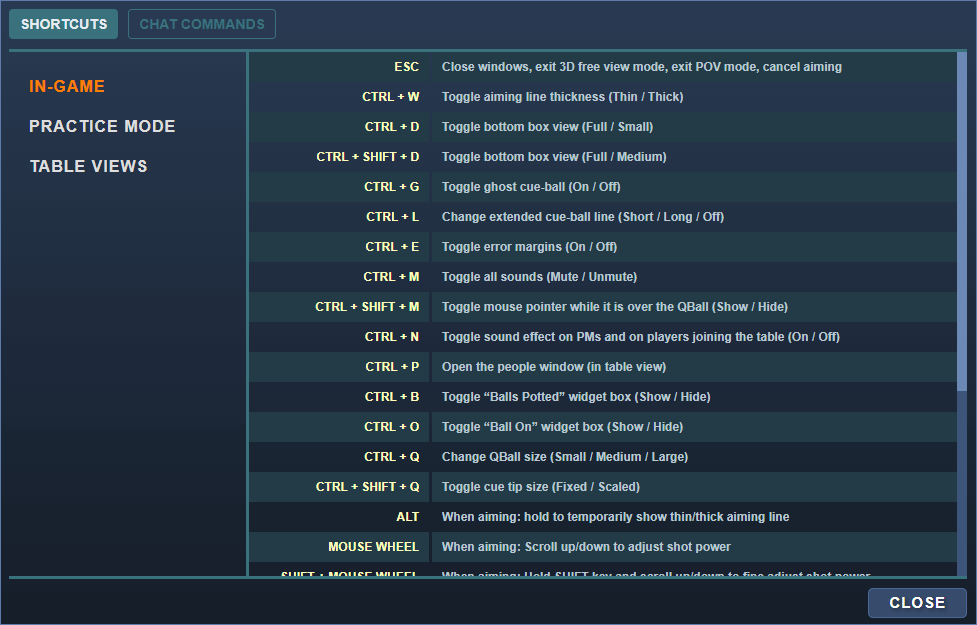 More information about the player inviting you is displayed directly on the invitation window. 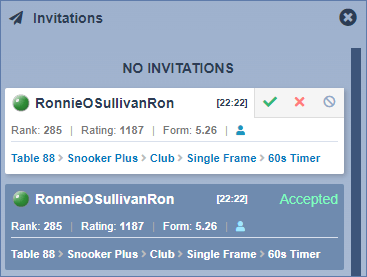 We have a new stat which measures* your positional play.

* The formula to calculate this stat is subject to change based on the accuracy of the game data gathered in the coming weeks.

This is the SKILL POINTS (SP) statistic, which will give you a rough idea of the skill level you posses. The formula to calculate the skill level looks at your win percentage, the amount of big breaks (30s, 40s, 50s etc) you've made and how often you make them. You must have played at least 50 frames on your account for your SP to show. 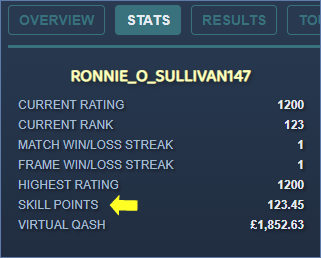 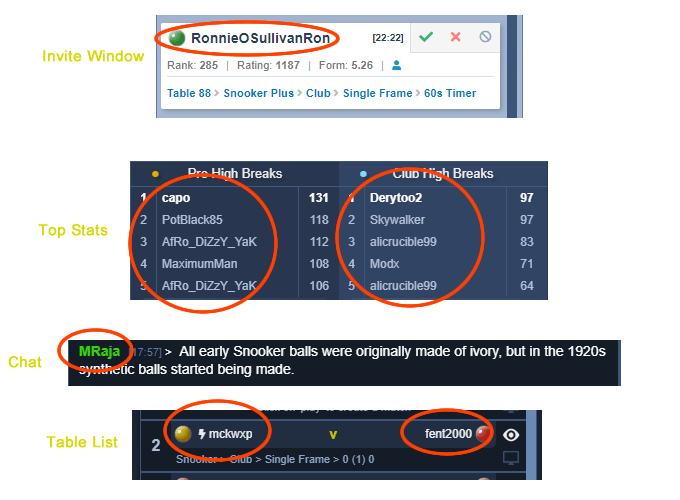 There are three new settings options:

- The in-game notification popup is now semi-transparent to allow players to see the aiming line through the popup if it is still showing.

- Sending private messages to a member who has logged off will now tell you that the user is no longer online, saving you from the embarassment of chatting to yourself :).

- Tournament no-shows have penalty points deducted from their rating, which is awarded to their opponents. If none of the two players show, the penalty points are not propagated to the next round.

- A darker shade of green has been applied to the green ball to allow some users to see it better.

- Bug Fix: The issue with merging balls has been solved.

- Bug Fix: Joining the Tournament Lobby directly from a link in another lobby whilst playing the Practice Mode, no longer bugs the first tournament match.

- Some strange sightings have been reported recently, which we...[The communication signal has been interrupted!]